What I’ve learned about ministry from my voice teacher 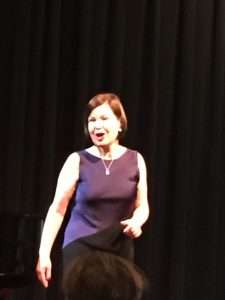 I’ve been taking voice lessons for almost 20 years, 16 of them with the same teacher, Judi Stabler. I’ve learned a lot of lessons from her. Three are particularly relevant to ministry:

First, be yourself. Judi is clear with me that I have the voice I have. No one is going to make me into a giant-voiced operatic singer. It’s not going to happen. She works hard to help me find music that suits my relatively modest voice. If the music says fortissimo (really loud), she says, make it forte, one level down. I don’t have the voice for fortissimo. She also has said many times, “If you try to sing like someone else, it sounds bad.”

Likewise, I’m never going to be flashy in my ministry. It’s just not me. I think I’m thoughtful and engaging, but not flashy.

What does this mean for you? God calls you to be you in your ministry. Not someone else. Sure, you can learn from others and what they are doing in their ministry. But don’t try to imitate them. Learn your unique strengths, your individual “voice” in preaching and in ministry as a whole.

Second, take criticism as a learning experience. Judi does not mince words when giving feedback. She’s been known to say straight out, “That sounds bad.” Thankfully, she doesn’t say it as often as she used to. As someone who tends to hate criticism, it’s been a wonderful growth-producing experience to get regular feedback that isn’t necessarily positive. If I hadn’t gotten that feedback, I would not have grown much as a singer. I had to learn to toughen up in order to continue studying music.

You and I both know that criticism is a constant in ministry. There’s always something that somebody doesn’t like. It’s not always from people who are trying to teach us something. But what if we could view each critic as a teacher in some way, even if we disagree with the content of the criticism? And perhaps there’s a nugget of truth in there, a place where we really do need to improve? At a minimum, most of us can improve in this way: we can get less reactive to the inevitable criticism.

Third, take risks. While Judi has taught me to accept myself and my voice in some ways, she’s pushed me hard in others. She’ll sometimes say, “Don’t sing like a Baptist minister!” She wants me to be freer in my singing, and a better actress. I’ve made a lot of progress. A peak was singing the French song La Vie en Rose last year, sitting on a stool with a beret and a fringed red shawl.

Doesn’t this conflict with the first point? When you are yourself, living in your own skin, it’s easier to take some risks. It’s not imitation, but experimentation. And of course, when you take risks in ministry, you get to practice the second point, dealing with criticism!

What is one small risk you are taking or could take this year in your ministry? Comment below and let me know. I’ll keep you in prayer.

P.S. If you want to see a video version of this (and see the red shawl), click here.

P.P.S. The photo is from a recital I gave a couple of years ago.