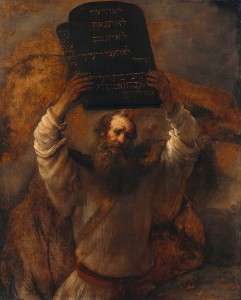 I’ve been thinking about Moses’ leadership. I love the Bible: It doesn’t tie things up into a neat little package. Moses’ story is not like a church leadership manual. No quick fixes – it takes 40 years! I was talking with a coaching client just this week and discovered he had been thinking about Moses, too, after reading Exodus in his daily lectionary. He was struck by the fact that Moses doesn’t actually make it to the Promised Land, and said that was helping him let go of outcome in his own ministry.

I have been writing about leadership and resistance lately, and Moses certainly faced plenty. In fact, there were three kinds of resistance he faced:

In leading churches today, we’ve got plenty of outside forces: changes in how people relate to institutions, broad forces of secularization and a post-Christendom world, the simple increase in busyness which means people don’t have as much time to give to church. I’m sure you’ve got your own list unique to your setting.

What to do in one sentence: Instead of bemoaning “today’s world,” think of five –or 20—creative ideas for doing ministry in your current context.

Substitute 1950 and 1960s America for Egypt, and we could be talking about many of our churches. Some people are still harking back to the days when the pews were full and Sunday School classrooms overflowing. The wilderness of having to step beyond our doors instead of waiting for people to come to us is a challenge for many church folks. Some dig in their heels at new mission efforts.

What to do in one sentence: Instead of trying to convince others, focus on your own clarity about where you want to go.

Each one of us has our own internal resistance. We’ve got issues that get in the way of our leadership. We are impatient, conflict-averse, money-phobic, oversensitive.

What to do in one sentence: Instead of blaming others, find one area of personal growth and work on it.

Big questions for you to mull over:

Where am I heading in my ministry? How can I develop myself to help me get there?

Immediate question to answer in the comments below:

What’s an idea you have for creative ministry where you are right now?

And here’s a post on the best way to improve your leadership at church.