by Margaret Marcuson in Blog, Leadership 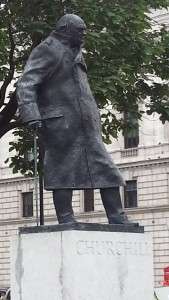 I’m back from three glorious weeks in England. So are you surprised that in my first post after my trip, I had to reference Winston Churchill?

On our recent trip to London we visited the Churchill War Rooms, an underground warren which was used as the planning base for the British effort in World War II. Here’s a picture of the statue of Churchill in Parliament Square, a few blocks away.

The rooms were left behind almost intact after the war ended, and made into a museum in the 80s. So there’s a sense of immediateness about them. Looking at the maps with pins in them to show the advance of armies, I got a sense of the challenge of their decision making. They had to make choices with high stakes over years, without knowing whether they would be successful.

We know a lot of things about Churchill’s life, but this experience really brought the day to day decisions and challenges front and center. There are three things that Churchill did as a leader, that I hope you are doing as well:

I’ve written about Winston Churchill before: see here and here for more.

Here’s a question to ask yourself:

What can I do to become more courageous in my leadership?

And here’s a question to answer RIGHT NOW in the comment section: What secular leader inspires you? Why?

P.S. I want to report briefly on my effort to do #3 (take care of yourself) by taking three weeks completely off from work. I was able to unplug and had a wonderful time. It was hard to make the decision but not to carry it out. And I’m glad to be back!